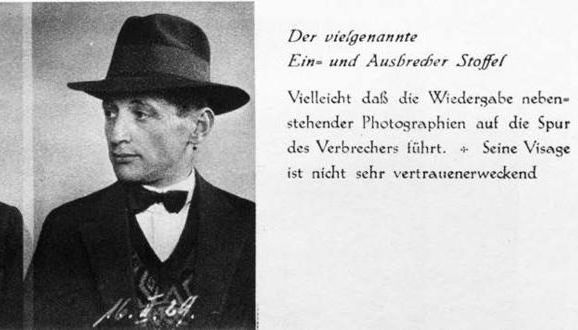 There are numerous legends and myths surrounding the next notorious prisoner at the Sennhof. He is also known as Grisons' "Robin Hood". We shed light on Johann Stoffel.

Much of the life of "Stoffel", as locals liked to call him, is only known from hearsay, which makes his story all the more entertaining. Johann Stoffel was born into the poorest of circumstances in Vals in 1899. Since his mother was not married, his birth was already ill-fated at that time. The family soon moved from Vals to Zurich, where his criminal career began. He made a name for himself as a thief, but also as a king of burglars and escapees, who skilfully outwitted the authorities and the police time and again.

He probably stole above all to be able to finance his living, as he was also a bit of a bon vivant who enjoyed going on trips with various sweethearts and giving them either stolen or bought jewellery. But there are also reports of his generosity towards the poor. He would sometimes simply leave his loot on the doorstep of the poor children in Vals. This gave rise to legends and a veritable "Stoffel cult". So the comparisons with Robin Hood were obvious. In 1971, a children's book was even written about him. In it, Stoffel more or less fictitiously steals the clothes of a clergyman in the bishop's residence after his escape from the Sennhof and, disguised as a Catholic priest, begins his flight in the direction of the "Bündner Oberland".

In fact, Stoffel broke out of the Sennhof twice at the height of his criminal career. And once even broke in. In 1929, he managed to break into the prison warden's office and steal CHF 417.63, stamps and a revolver. The break-in at the Sennhof prison naturally caused some ridicule throughout Switzerland. An indictment from 1929 attests Stoffel a total of 18 thefts in Grisons alone. There were several more throughout Switzerland. He never used violence against people. He confessed to most of the burglaries immediately during questioning.

After his renewed imprisonment in 1931, he managed to rehabilitate himself and even succeeded in business. He became a master tailor and subsequently owned a flourishing uniform factory that also tailored police uniforms, among other things.

For more stories about Johann Stoffel, we recommend the book "Vom populären Dieb zum diplomierten Schneidermeister" by Jürg Simonett, which was also the source for this blog post.